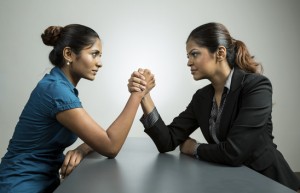 Few things are as inevitable and unavoidable at the workplace than misunderstandings and conflicts. As the office becomes an ever more rapid-paced, multi-tasking and globalized environment the pressure to deliver quality and reach targets on time and in-budget dramatically increases, as does the potential for conflict.

The ways in which businesswomen and businessmen deal with conflict — and our preconceived notions of how the genders approach conflict situations — differs for a variety of societal, psychological and emotional reasons. Moreover, a mixture of learned behavioral patterns and entrenched assumptions presents higher hurdles for businesswomen than for businessmen when coping with conflict.

One major hurdle, according to Audrey Nelson, PhD and Claire Damken Brown, PhD, is that many women chose conflict avoidance strategies because they do not want to be seen as aggressive or confrontational, qualities associated with men. For these reasons, some women even deny they are competitive. These researchers point out that women take conflict more personally and see it as disruptive. Additionally, both female and male coworkers expect women to display greater empathy towards the feelings of others and to be more supportive and nurturing — thus avoiding conflict rather than embracing it.

Indeed, according to work by gender expert Dr. Deborah Kolb of the Simmons School of Management, women often are the “peacemakers” of their organizations. They become webbed in other’s conflicts out feelings of loyalty, sympathy or simply because their colleagues come to them to offload their woes — a situation many men would reject as a waste of time and energy, reasoning, “what’s in this for me?”

Moreover, women are expected to be “nice,” a subtly nefarious burden few men have to bear. This indirect yet powerful pressure forces businesswomen to suppress their real and natural emotions which may include healthy feelings of frustration, anger and aggressiveness. Thus, their true emotions and attitudes go “underground” in an attempt to keep up appearances of how they “should” behave. The tensions produced by such emotional self-suppression, however, is starkly shown in a study by Zogby International and the Workplace Bullying Institute, which revealed that when a “woman bullies someone else, 80 percent of the time she has a female target” — a form of gender-hate spawned by the relentless strain to be continually “nice.”

Linked to this are the results published in the Academy of Management Perspectives by Dr. Leah D. Sheppard and Dr. Karl Aquino at the Sauder School of Business, the University of British Columbia. This paper illustrates that female and male subjects perceive conflict between two women as more negative than as between male-male and male-female, in part because it violates notions of how women are supposed to behave.

There is also a widespread belief among both genders that women judge each other more harshly than men judge women, women judge men or men judge other men. A conflict between two women is labeled a “catfight,” a term of disparagement that does not exist for men. Similarly, the “Queen Bee Syndrome” is used to describe a female boss who has typically “male traits” — ambition, thinking of results not people, dominance, and feeling threatened by successful subordinates, particularly if they are women. Labeling such behavior a “syndrome” as concerns businesswomen defines it as a sort of mental or behavioral illness, when in fact these traits are characteristic of powerful leaders, regardless of gender.

There are, of course, arguably tangible differences in how females and males deal with workplace conflict. Men often view conflict as a fight over territory, as a chance to position themselves, push forward their ideas and as an opportunity to brand themselves to their boss. For males, conflict may be a tactic, a way to test an opponent’s resolve. Women, on the other hand, often desire to mediate conflict, seeing it as hurtful to team members. For this reason they may feel the need to think of other’s feelings first, consciously or subconsciously allowing their own wants and desires to take a backseat, or to be completely suppressed.

Yet it is vital to remember that conflict is simply another aspect of the broad and rich palette of human communication. In a positive sense conflict — if not allowed to spin out of control and become destructive or personalized — can lift the fog of differing meanings, focus minds on the issues at hand and create the clarity to resolve vexing problems.

In practical business terms, preconceived notions of how females deal with conflict affects hiring, developing and promoting businesswomen. Female and male executives, indoctrinated with stereotypes of supposedly correct female office behavior, may pass over qualified women for fear that they are “too emotional” or “complicated,” cannot effectively manage other females and will sow disharmony.

But some things in the business world, as in life itself, have to be confronted. Successful businesswomen boldly and vigorously enter necessary conflicts — targeting things, not people — fully conscious that this is one of the hallmarks of an effective leader. They are aware that being in touch with, in control of, and fully living out our emotions and feelings make both genders healthier in mind, body and soul — and thus happier, more productive and more engaged employees and managers at the workplace. Conflict, when well-managed, is communicative and controlled, fair and focused, and as transformative as it is transgender.